Warning: include(wp-includes/class-wp-term-connect.php) [function.include]: failed to open stream: No such file or directory in /home/content/11/9664311/html/wp-config.php on line 94 In my opinion, you cannot get more Southern summer than a good peach cobbler.  If you are from anywhere in the south, especially Texas, I’m sure you have some good memories that involve peach cobbler and your family.  Any that come to mind?  One of my mom’s special desserts was a peach cobbler.  Admittedly, I am not a big peach fan, nor have I ever been.  But when you combine fruit with a cakelike dish, I’m sold.  Top it off with some homemade vanilla Ice Cream and we’re cooking with fire.  The aroma  of it wafting through the house as it comes out of the oven is enough to draw anyone’s attention into the kitchen. Peaches are a plenty here in Texas and my Mother In Law gave us a few from an orchard about an hour outside of town.  I knew exactly what I wanted to do with them. Freshly picked peaches are so juicy and sweet, they are absolutely perfect for peach cobbler.  To me, the best part about peach cobbler is a crunchy crust on top and the gooey sweetness of the filling, but mainly the crust.  The crunchier and sweeter the better if you ask me.  I love the combination of textures in each bite when you have a crust that has some crunch.  Which is why I decided to up the anti on plain peach cobbler and brûlée it.  It’s been a while  since I was able to use my kitchen torch, and I was hankering to do so.  Don’t worry though, much like Creme Brûlée, you don’t have to own a kitchen torch to make this.  Just a oven set to broil does the trick!  Side note, I was really unsure if I could call this a Brûlée since you’re used to see it next to the popular french dessert, but I went ahead and did so. Even if it means I’m breaking all of the rules of recipe naming. One of the most important parts of this recipe is macerating the peaches.  It really ups the sweet flavor in the dish.  Don’t skip it! Also, In case you didn’t have this handy dandy trick for peeling the skin off of peaches, this is what I do.  It saves time and frustration.  Once that part was done and the peaches were macerated, Kirkley was able to step in and help.  It is really adorable how much she loves being in the kitchen with me. I always try and bake once a week a recipe where she can spend some time with me “making”.  I know I’ve said it before, but baking and cooking is a great educational tool as well!  Not to mention the sweet bonding time.  Please get those kiddos in the kitchen with you if you can and they are willing! Now I think I’ve jumped all over the place in this post, but the most important thing to take away from this – This IS the best Peach Cobbler Recipe you will ever make.  I’m not lying.  If you like the crunch on top, and sweet gooey in the middle, you will love this.  Oh, and I cannot believe I forgot to mention how the burnt sugar coating on top takes the flavor to a whole other level of amazing.  Do yourself a favor and give it a shot!  I hope you enjoy it as much as we did!  Now that it’s gone, I’m already craving it again. 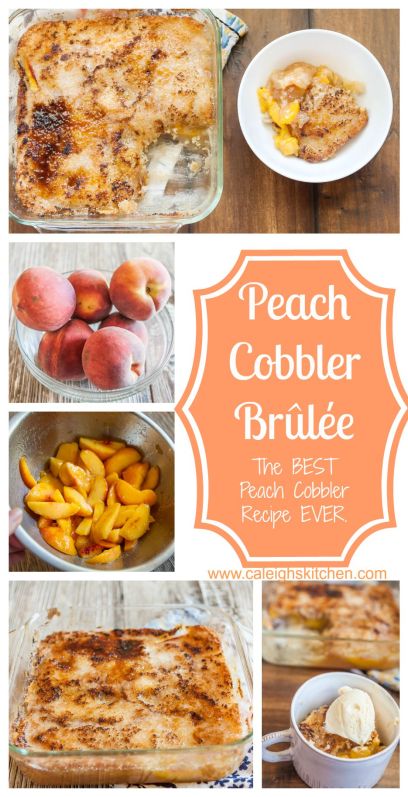